The Difference in a Decade

Facebook has a way of reminding you of what you were doing 10 years ago and of course, encourages you to share those memories.

Do you remember what was happening 10 years ago? Two things are pretty significant because it would affect so many Canadians: 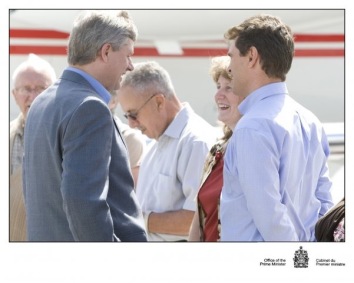 1. There was a federal election in Canada,

2. The stock market was dropping and could not seem to find a bottom.

For me, those times included some of the most dramatic events that led to a major life change. I ran as a Conservative candidate in the 40th Canadian General Election. Whenever people find out about my election run they ask, “How did you do?” My reply usually starts with, “Do you remember Danny Williams, the Premier of Newfoundland Labrador? Remember his ABC campaign (Anybody But Conservative)?” The result: no Conservative was elected in the province in that election, not even those who were favoured!

After the election, I returned to my financial planning practice (10 years ago on this very day, October 15th).  My clients, like others around the world, were seeing their portfolios declining by thousands, especially in the weeks I was campaigning in an election that I had no chance of winning. They were still on an emotional roller coaster wondering if they would ever regain what was lost. 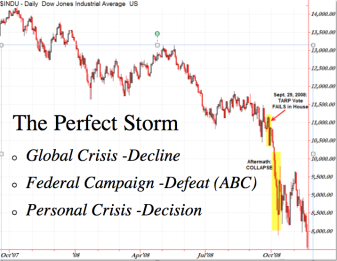 This led me to a very dark place, what my wife often refers to as my mid-life crisis. I struggled with the fact that I was not there for my clients when they needed me most; that was a fail. I put my name forward to run in a federal election and felt very much alone, especially after the devastating election night. I felt defeated (in more ways than just the election) and questioned my purpose. If you look at the chart and the shaded area of yellow, the stock market decline seemed to parallel my life at this time. What was my life all about anyway? It was one of my lowest, darkest times.

I needed a change, a new direction, maybe a new career. I needed something to get me out of this dark place. I searched the web every evening after work for opportunities that I felt suited for but came up empty. Or did I? I prayed but those results didn’t appear any better. I did, however, find a new role with a different Credit Union. This did not seem to make much sense though because it meant I would be managing less than 20% of the assets I was managing where I was. That decision just didn’t seem to make sense but I just knew I had to make a change.

What is interesting is that in my job search, I also found a membership organization for Christian financial professionals known as Advisors with Purpose (now known as Kingdom Advisors). I joined as a member and started to participate in the monthly coaching calls. I also did the KA Core Training which helped me understand what it meant to be called to the role of financial planning. I never really felt called to be a financial planner; it was more like just a job for me, but my perspective began to change. As time progressed, I realized more and more that I was “called” to do what I was doing. It was not just a job, but my interaction with clients was indeed an answer to the calling I felt in life for many years.

Fast forward to the fall of 2013 when I am asked to become the National Director of Kingdom Advisors in Canada. This would mean helping other Christian financial professionals understand their own calling; that excited me. It also meant leaving my practice and clients and leaving “the rock” (Newfoundland), where I had lived all my life; that scared me.

In 2015, I left my book of business behind and my wife and I moved to Ontario, just on the outskirts of Ottawa. I ended up in the Ottawa region anyway, not because I was elected as a Member of Parliament, but to fulfill a completely different purpose. Life has taken a very different path than I thought. I can truly say it is a journey of faith that is not without dark moments.

I will give you hidden treasures, riches stored in secret places, so that you may know that I am the LORD, the God of Israel (& Canada), who summons (or calls) you by name.

Have you ever felt like your life is like a chart of the stock market? Has it often resembled that sort of roller coaster ride? Look for the treasures that may be hidden in the dark place, invest your life at that point where opportunity presents itself because the return on the investment of your life can be significant and have eternal rewards!

Lorne Robinson I possess more than 30 years of progressive experience in public relations and serving others. In my present role as National Director at Kingdom Advisors, I have opportunities to engage with Christian financial professionals across Canada. My passion is to help people find a deeper purpose in their financial dealings and contentment with their lifestyle.
Published October 15, 2018October 15, 2018

2 thoughts on “The Difference in a Decade”