After writing my blog in January concerning the powerful song “The Reckless of God,” my wife and I were able to visit a few churches as we travelled during February month. Interestingly, in the first two churches we visited, they sang this song and I was moved to tears on both occasions. Why? It is such a significant expression of God’s love reaching out to those who are distant and away from Him.

This song is definitely controversial simply because it uses the word “reckless” to describe God’s love. One response to my blog asked a couple of very good questions: “How can you separate God from His love? In fact, God is love, so by speaking of His love being reckless, are we not saying that God Himself is reckless?” My question in response is this: Can we limit God’s love by our theology? God is not confined to our way of thinking and as much as we think we understand God, we should never underestimate His ability to reach out to others in the manner He chooses.

In my devotions this week, I have been reading the book of Hosea and could not help but reflect on this song again as I read. Here is how Hosea starts in verse 2 with an unusual instruction to the prophet:

When the Lord first spoke to Hosea, He said this to him: Go and marry a promiscuous wife and have children of promiscuity, for the land is committing blatant acts of promiscuity by abandoning the Lord.

Seems like pretty reckless strategy, don’t you think? The command from God was to marry a prostitute, but wasn’t God concerned about the reputation of his servant? Reckless is defined as utterly unconcerned about the consequences of some action. That sounds like the attitude of God when choosing a wife for the prophet. The essence of the story is really to illustrate exactly how God loves and pursues His people despite their unfaithfulness to Him. Patiently, God continued to pursue this one-sided relationship by lavishing love and mercy on a nation that rejected Him. The devotional I read all but quoted the lyrics to the Reckless Love song but fell a little short of actually referencing His love as reckless.

Oh, the unstoppable, unmatchable, inextinguishable, everlasting love of God! We don’t deserve it. We can’t fully comprehend it. 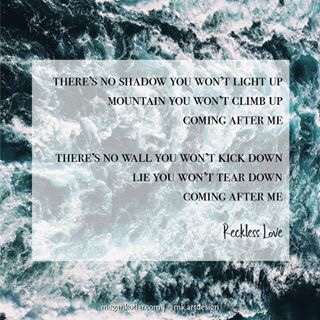 The song is based on Luke 15; the lost sheep and the lost son, which can be argued as evidence of “the reckless love of God.” However, if you search the Bible you can easily find multiple examples that can support the truth expressed in this song. Just take a look at the genealogy of Christ, particularly some of the females (who are not normally mentioned at all). I won’t go into the stories in detail but Tamar is the first female (Matt. 1:3) who pretends to be a prostitute and tricks her father-in-law to continue the family tree (Tamar’s story is in Gen. 38). Then there is Rahab (Matt 1:5), who was a prostitute who had no hesitation to lie and deceive her own people to protect herself and her family (Joshua 2). Then one name is not mentioned, but she is referred to as the wife of Uriah (Matt. 1:6). Remember he was the guy David sent to the front lines to make sure he was killed to try and cover the adulterous affair he had with Uriah’s wife (2 Sam. 11).

Why are these stories brought forward and included in the genealogy of Christ? What do these stories have in common? They all include sexual promiscuity. You would think God would be more interested in covering these details, rather than reminding all the readers about the details. Let’s face it, those are the types of things most of us would prefer to cover, not remind everyone that these things are part of the family history. God is obviously not at all concerned about the consequences of using people who have been involved in these sexual sins.

God is interested in redeeming those lives and including them in His story, reckless as that might seem. Maybe as you read this you can relate in some way to some of these people. You are distant from your Creator and feeling hopeless. Be assured of this fact, He is pursuing you with a goal of including you in His great story.

The video below is 12 minutes long but includes Cory Asbury’s story behind the song. Is this song being sung in your church?