Are You Hearing But Not Understanding?

Just over two years ago, I had surgery on my shoulder and I now visit a specialist every six months. Recently, I had another visit and I usually take my wife with me to help me understand since the doctor has a very strong French accent. Even though he speaks English, it can be very difficult to grasp the meaning of his words. During the appointment, he asked a question, but we just looked at each other bewildered because neither of us understood a word. He repeated it with the same result. He was saying “Ohh-ta-wah” in such a way that when it was placed in a sentence, we just couldn’t understand. After stating it the third time, we both realized he was asking if my surgery had been done here in Ottawa.

Have you ever heard someone but not understood what they said?

Sometimes, language or dialect can be a barrier to understanding. I recall when we had friends from Ontario visit us in Newfoundland and we had a conversation with some locals. Our friends heard us speaking, but did not understand. Maybe I shouldn’t be shocked because the very tone of the common phrase, “Yes b’y,” actually changes its meaning.

Politicians typically only say what they want us to hear and we have to dig deeper if we desire to get the entire meaning; otherwise our perspective remains limited. For example, the Trudeau government often claims it has cut taxes for middle-class Canadian families. A recent article helped me understand that while it did reduce the second lowest federal income tax rate (from 22 to 20.5 per cent), it also eliminated a number of tax credits, thereby increasing income taxes for Canadians who previously claimed such credits. Result: 81% of middle-class Canadian families with children are paying more in personal income taxes.

The Liberals quickly speak of reduced tax rates, but the elimination of tax credits enlightens our understanding of the issue. What we comprehend about any issue or even a person, depends on what we hear (and read). 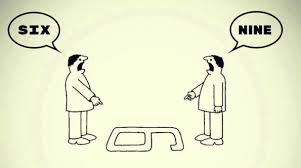 If you think about it, the perspective from which you see things can be the very obstacle that prevents you from seeing another point of view.  (Doesn’t this graphic resemble a political debate? It totally depends on which side you are on).

The Bible has some interesting things to say regarding understanding:

In our work we should:

In a conversation, an accountant told me he keeps his antennas raised when in discussion with clients. Since mankind is spiritual, our spirits are meant to be active and sensitive, which leads to an understanding of others. It is the spirit in man … that makes him understand. This depth of understanding is the requirement to draw out purpose.

In our efforts to understand others, how often do we simply rely on our own thoughts?  By ignoring our inner person (not having our antennas up), are we missing the greatest opportunities to explore the deep waters (purpose) hidden within others?

Lorne Robinson I possess more than 30 years of progressive experience in public relations and serving others. In my present role as National Director at Kingdom Advisors, I have opportunities to engage with Christian financial professionals across Canada. My passion is to help people find a deeper purpose in their financial dealings and contentment with their lifestyle.
Published October 29, 2017